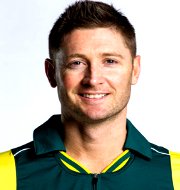 Australian cricketer Michael Clarke has announced his retirement from One Day Internationals (ODI) cricket format.
He had made this announcement prior to playing ICC Cricket World Cup 2015. However, he will continue to represent Australia in the Test matches.
He made his last ODI appearance in the final World Cup match against New Zealand. In this match he was captain of team and had scored 74 runs which and helped Australia win the 2015 World Cup by 7 wickets for fifth time.
With this, Clarke has joined group of Australia’s World Cup winning captains that include Allan Border, Ricky Ponting (2 times) and Steve Waugh.
Michael Clarke had started his ODI cricket career in 2003 and test career in 2004. In his ODI career, he had played 245 matches and had scored 7981 runs. His highest score was 130 runs. He had bowled in 106 innings and had taken 57 wickets.