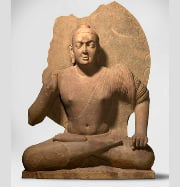 Canberra based art gallery in Australia has agreed to return a 2,000-year-old Indian-origin sculpture of Gautama Buddha back to India.
The Sitting Buddha sculpture which was displayed in this gallery has its roots traceable to Mathura in Uttar Pradesh. The sculpture is made of sandstone is an image and depicts very unique art of the ancient Mathura region.
Archaeological Survey of India (ASI) played important role in negotiating the legality of returning this statue.
Earlier, Germany had returned 10th century Durga idol in Mahishasuramardini avatar to India which had gone missing from a temple at Pulwama in Kashmir in 1990s.