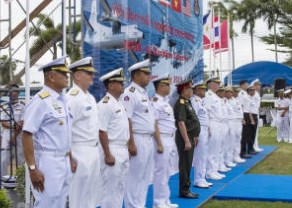 The first ASEAN-US Maritime Exercise (AUMX) between regional bloc- Association of Southeast Asian Nations (ASEAN) and United States kicked off at the Sattahip Naval Base in Thailand.  The five day naval exercise is co-led by the navies of US and Thailand. It will stretch into international waters in Southeast Asia, including Gulf of Thailand and South China Sea and conclude in Singapore.

It will see participation of navies of all 10 members of ASEAN (Thailand, Brunei, Cambodia, Indonesia, Laos, Malaysia, Myanmar, Philippines, Singapore and Vietnam) and US. 8 warships, 4 aircraft and more than thousand personnel from US and 10 ASEAN countries are taking part. Navies of these countries will take part in the naval exercises which include boarding of target vessels to simulate search and seizure.

This mega maritime exercise comes at a time of stepped-up US engagement in region and tensions between China, US and Southeast Asian nations over South China Sea (SCS). China is claiming its sovereignty over much of SCS by invoking its so-called nine-dash line as supposed historical justification to the waters, which are key global shipping route. Its claim is overlapping parts of SCS are claimed by Brunei, Malaysia, Vietnam and Philippines.