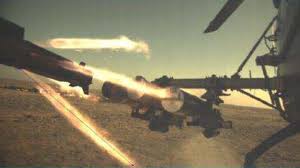 HELINA is helicopter launched version known of NAG ATGM, designed and developed indigenously for Indian Army under integrated guided missile development programme (IGMDP). It is manufactured by India’s sole missile producer, state-owned Bharat Dynamics Limited. HELINA is one of the most advanced Anti-Tank Weapons in the world. It works on “fire and forget” principle and operates in Lock on Before Launch mode. It has operational range of 7-10km (after air-launched). It is equipped with highly advanced Imaging Infrared Radar (IIR) seeker along with integrated avionics. This technology is possessed by very few nations. It also possesses advanced passive homing guidance system. It has been designed mainly to destroy modern main battle tanks and other heavily armoured targets.