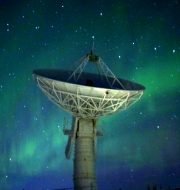 Astronomers have discovered two of the most powerful phenomena in the universe, a supermassive black hole and the collision of giant galaxy clusters about 2 billion light years from Earth.
It was discovered combining data from India’s Giant Metrewave Radio Telescope (GMRT), NASA’s Chandra X-ray Observatory and other telescopes.

GMRT is an indigenous project set up by Pune based National Centre for Radio Astrophysics (NCRA). It has been designed for investigating a variety of radio astrophysical problems, ranging from nearby Solar system to the edge of observable Universe. Astronomers from all over the world use this telescope regularly to observe many different astronomical objects such as galaxies, pulsars, supernovae, HII regions and Sun and solar winds.