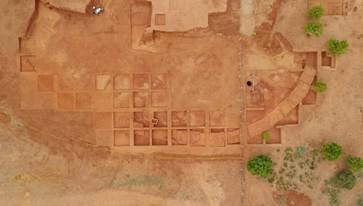 The Archaeological Survey of India has discovered the remains of huge settlement during its first phase of excavation at Gottiprolu near Naidupeta, Nellore, Andhra Pradesh. It has uncovered a mass settlement that was surrounded by a massive brick enclosure

Period of the excavations

The presence of these jars prove that it was an important trade centre of the period. Also it implies that liquid commodities were transported as amphorae wares are often used to carry liquid items. Also, the site’s proximity with the sea coast suggests that it could have serves as a strategic settlement involved in maritime trade.