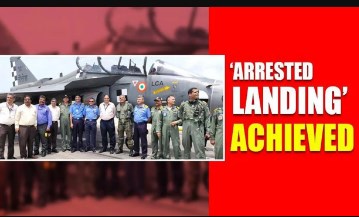 The First ever arrested landing of Naval variant of Light Combat Aircraft (LCA) Tejas, a 4.5 generation, light weight, multirole fighter was successfully executed at the Shore Based Test Facility (SBTF), INS Hansa in Goa. This will pave the way for this Indigenous platform to undertake Aircraft Carrier landing demonstration on board the Indian Naval Aircraft Carrier, Vikramaditya.

Other Participants– Certification Agency (CEMILAC), Quality Agency (DGAQA) and all the men and women on the ground who serviced the aircraft and monitored it during strenuous trails.

Besides marking the beginning of a new era where multiple agencies have come together to achieve a common goal, this event has also put India on the world map as a country with capability to design a deck landing aircraft.

What is Shore Based Test Facility (SBTF)?