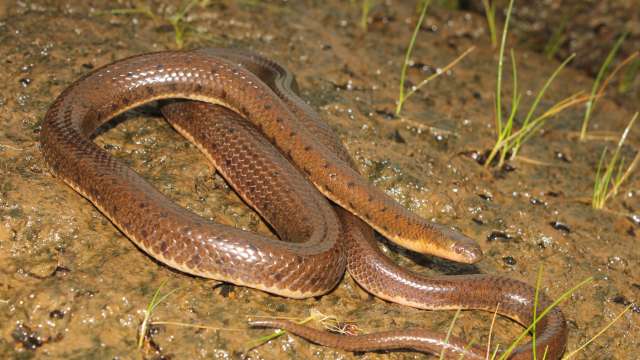 A new species of non-venomous aquatic snake named Aquatic Rhabdops, which was misidentified since 1863, was identified and described as new species from northern Western Ghats in Maharashtra, Goa and North Karnataka.
Earlier the new species, Rhabdops aquaticus, was considered as variant of Olive Forest Snake, first described in 1863. But new study has confirmed that Aquatic Rhabdops has different colours and patterns and also vary in other features of size, shape and structure, and also genetic make-up.

Aquatic Rhabdops snakes belong to genus Rhabdops which are endemic to India. It is named after its aquatic nature since adults of these species are mostly associated with freshwater forest streams and juveniles are seen in water-logged areas, mostly on rocky plateaus.
They are three-foot-long nocturnal snake and mostly prey underwater like other water snakes. Adult Aquatic Rhabdops have off-white bellies and black spots on their olive brown skin, juveniles are olive green, with yellow undersides. This colour difference in life stages may be due to different local habitats.
Aquatic Rhabdops is found only in the laterite plateaus of the northern Western Ghats in Goa, southern Maharashtra and northern Karnataka which are mostly areas facing high human pressure.