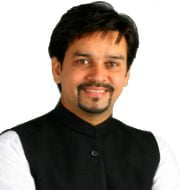 Anurag Thakur (41) was unanimously elected as President of BCCI (Board of Control for Cricket in India) by the board’s special general meeting (SGM) held in Mumbai.
He is 34th BCCI President and shall have tenure till September 2017. He succeeds Shashank Manohar who stepped down to take get elected as ICC’s first independent chairman.
Thakur is the second youngest BCCI President after Fateh Singh Gaekwad who was the youngest BCCI President to get elected at the age of 33 in 1963.
Before getting elected as President, Thakur had resigned as BCCI Secretary. He is a BJP MP in Lok Sabha from Hamirpur district of Himachal Pradesh.
Besides, Ajay Shirke was named as successor of Thakur as BCCI Secretary. Shrike will represent BCCI at the chief executives committee meetings of the ICC.

About Board of Control for Cricket in India (BCCI)