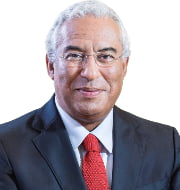 Atonio Costa, the leader of Portugal’s Socialist Party was named Prime Minister of Portugal.
He was appointed as PM by President Anibal Cavaco Silva and has tasked him to form a new government due to political instability caused by an inconclusive 2015 general election results.
With this, for the first time in history of Portugal Socialist government came to power with the support of Communists parties after dictatorship was overthrown in 1974.
Background
After Portugal’s 2015 general election, moderate Socialist Party in coalition with the Communist Party and Left Bloc was able to secure a 122-seat majority in the 230-seat parliament. This coalition had forced then ruling centre-right coalition government led by Pedro Passos Coelho to resign as the election mandate did give a clear majority to any Party.

Interesting Fact: Portugal was the first western country to colonise some parts of India in the early sixteenth century and the last to leave in 1961.