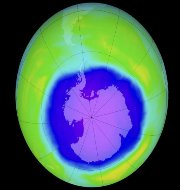 Scientists for the first time have found clear evidence that the thinning in the ozone layer above Antarctica is starting to heal.
Ozone layer in the atmosphere’s stratospheric layer comprises of Ozone (O3), an allotrope of oxygen. It plays important role in blocking harmful ultraviolet radiation (UV) from the Sun.
The absence or thinning of Ozone layer increases the chances of skin cancer, cataract damage in human beings and even causes harm to animals and plants.
Key Findings

For more details: (i) Depletion of Ozone Layer (ii) Antarctic Ozone hole (iii) Is Ozone hole over only Antarctica?