Three Animal Species in India Extinct Due To Desertification: Researchers 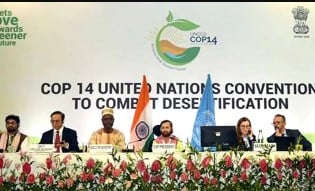 According to some researchers three animal species namely Indian Cheetah, pink-headed duck and Great Indian Bustard have become extinct due to desertification in India. The study by researchers was put forth at 14th meeting of Conference of Parties to United Nations Convention to Combat Desertification (UNCCD COP 14).

The UNCCD COP 14 meeting is being held in national capital from 2-13 September 2019 and is being attended by representatives of 196 countries with almost 5000 participants.

Researchers claimed having a database of over 5.6 million specimens, collected from all over India and also from neighbouring countries before independence which gives a lot of information about how things have changed in more than 100 years.

A breeding programme for GIB has been initiated by government.

Projects initiated by Union Ministry of Environment Forest and Climate Change (MoEFCC) focuses on steps required to save animals from extinction and ensure a healthy environment for endangered species. Elephant project, Rhino project, Tiger project and other variants of this kind are in action to protect and preserve animal lives.

There are 771 protected areas whose land composition cannot be changed, which is boosting animal population.