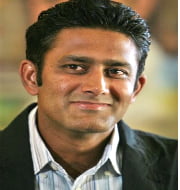 Former India captain Anil Kumble has been re-appointed ICC (International Cricket Council) Cricket Committee chairman for a second term of three years.
Earlier he was appointed as the chairman for his first term in 2012 and now he will continue to head the panel until 2018. Anil Kumble is all-time highest wicket-taker for India.
Other appointments

The ICC Cricket Committee is representative of all stakeholders in the game of cricket, including players, umpires and the media. It is empowered to make recommendations on cricket playing issues to the ICC’s Chief Executives’ Committee (CEC) and, if the matter is a policy matter, the ICC Board for approval.