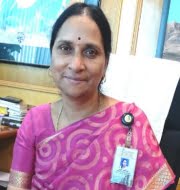 Anandi Ramalingam has assumed charge as Director Marketing of the Public sector Bharat Electronics Ltd (BEL).
With this she becomes first woman to be appointed as the Director of the company. Prior to this appointment, she was the general manager heading the Military Communication Strategic Business Unit (SBU) at BEL’s Bengaluru Complex.