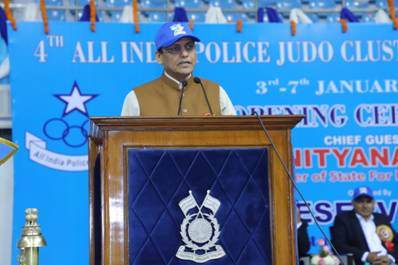 The Union Minister of State for Home Affairs, Nityanand Rai inaugurated the 4th edition of the All India Police Judo Cluster Championship on Friday 3rd January 2020 at New Delhi. The sporting event will conclude next Tuesday, 7th January 2020 is organized by the Central Reserve Police Force (CRPF). Previous editions of the cluster have been organized by Sashastra Seema Bal (SSB), West Bengal Police and Odisha Police in 2016, 2017 and 2018 respectively.

In this edition of the 5-day tournament, a total of 1207 sportspersons from 34 teams across the country will be competing for 15 trophies and 214 medals, out of which a separate medal will be awarded to the best gymnast. The Minister addressed the gathering at the inauguration and emphasized the important role that sports have in the unity of the country and expressed organizations to conduct such sporting events in entry-level across the country so that the young generation of sporting talents can hone their skills.