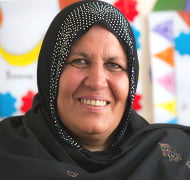 Afghan refugee teacher Aqeela Asifi has won the 2015 United Nations High Commissioner for Refugees (UNHCR) Nansen Refugee Award.
As a teacher, she has been recognised for her tireless and brave dedication to educate Afghan refugee girls in the Kot Chandana refugee village in Mianwali, Pakistan by overcoming the struggles of life in exile.
Asifi is a former teacher who fled from Kabul, Afghanistan with her family in 1992 for finding safety in the remote refugee settlement of Kot Chandana in Pakistan.
In the refugee camp she started teaching Afghan refugee girls by overcoming strict conservative cultural traditions which does not allow Afghan women to learn.