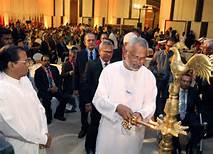 The fourth edition of Asian electoral stakeholders forum (AESF-IV) was held Colombo, Sri Lanka to discuss the state of elections and democracy in the region. This was for first time AESF was held in South Asia. It was jointly organised by Election Commission of Sri Lanka and Asian network for free elections (ANFREL).

The theme of AESF-IV was ‘Advancing Election Transparency and Integrity: Promoting and Defending Democracy Together‘. It was attended by more than 250 delegates from 45 countries. India was represented by Chief Electoral Officer of Maharashtra Ashwini Kumar and NGO.
It covered wide array of crucial election issues like current state of democracy in Asia, common electoral challenges in the region, and various good practices employed to make elections better. It culminated with endorsement of landmark document, urging election stakeholders from within Asia and beyond to promote and defend democracy in the region.

ASEF is the largest gathering of election management bodies (EMBs) and civil society organizations (CSOs) in Asia. It is being held in order to secure the broad establishment of democracy and security when holding elections within the region.
It provides opportunity for Asian election commissions, election observers, non-government organizations (NGOs) and interstate bodies to gather and discuss state of elections and democracy in the region. It also provides platform for institutionalizing capacity building efforts to pave the way for more meaningful and credible election through cooperation among stakeholders.
Previous AESF gatherings were instrumental in setting benchmarks and guidelines on conducting truly democratic elections which respect internationally recognized human rights and election principles and norms.  The first AESF was held in Thailand in 2012 and had endorsed Bangkok Declaration on Free and Fair Elections. The second AESF was held in Dili, Timor Leste in 2015 and had established Dili Indicators of Democratic Elections. The third AESF was held in 2016 in Bali, Indonesia which had framed Bali Commitment: Eight Keys to Electoral Integrity.