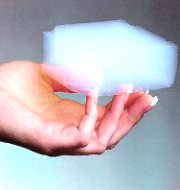 Scientists have developed Aerogel, a transparent heat-resistant super-insulating gel using beer waste. It may be used to build greenhouse-like habitats for human colonised on extraterrestrial habitats such as Mars or Moon. It could also be used on buildings on Earth to help make huge savings on energy costs.

Aerogels defining feature is air, as it comprise at least 90% gas by weight. Their thin films are made up of crisscrossing patterns of solid material that trap air inside billions of tiny pores, similar to bubbles in bubble wrap. This trapping capacity makes them good insulators.
Recently developed transparent heat-resistant super-insulating aerogel using beer waste looks like flattened plastic contact lens film (roughly 100 times lighter than glass). It is transparent compared to similar products in market allowing to see-through it. It is also resistant to heat. It is also cheaper to produce because it comes from beer waste.
Potential Applications: It could also be used on buildings on Earth to help make huge savings on energy costs. It can be also used in windows and also in extraterrestrial habitats. It enables to harvest sunlight through that thermally-insulating material and store energy inside, thus protecting from big oscillations in temperature especially on Mars or on moon.