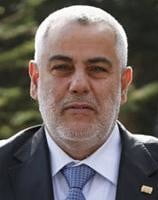 Abdelilah Bekirane was re-appointed as the Prime Minister of Morocco for second term. Benkirane has been serving as Prime Minister since November 2011.
It was officially announced by Mohammed VI, the king of Morocco after Benkirane’s Islamic Justice and Development Party (PJD) emerged victorious in recent general election.
Now PM Bekirane will now reach out to other parties to form a coalition government as he does not have absolute majority in lower house.
Background