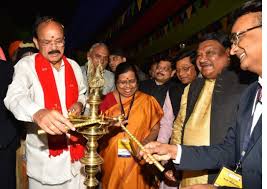 Vice President M Venkaiah Naidu inaugurated Aadi Mahotsav, a fortnight long Tribal Festival in New Delhi. The theme of the festival is A Celebration of the Spirit of Tribal Culture, Cuisine and Commerce’.
The festival will feature exhibition-cum-sale of tribal handicrafts, art, paintings, fabric, jewellery and much more through about 200 stalls. Over 750 tribal artisans and artists from over 25 States participated in the festival. Tribal India cuisine, recreated and presented in delectable forms to suit urban tastes by special tribal chefs is special feature of the festival. ‎In line with the national aspiration to go cashless, all stalls will prefer and promote payments through cards.

The name Aadi Mahotsav suggests that  the ‘adi’ factor is important about them.  The adivasi way of life is guided by primal truths, eternal values and natural simplicity. The greatness of tribes lies in the way they have managed to retain primal skills, the natural simplicity. ‎This quality gives their arts and crafts a timeless appeal. So, this festival seeks to channelize and promote their natural skills and provide then sources of income.
The Government has formed the Tribal Cooperative Marketing Development Federation of India (TRIFED) for achieving this. TRIFED is working in this direction and now has embraced e-commerce and digital platforms to take the business forward.

In India, tribes constitute over 8% of country’s population which corresponds to over 10 crore Indians. The national object of inclusive development includes the development of tribes as an important component. Even Constitution enjoins upon Government the responsibility of addressing the special needs of the tribals.