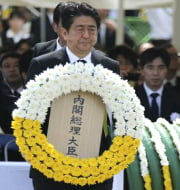 70th anniversary of dropping of disastrous Atomic bomb on Nagasaki city of Japan was observed across the world.
A solemn ceremony including ageing survivors, relatives of victims observed and guests from 75 countries was held on the ground zero by marking a minute’s silence at 11:02 am local time at which the devastating explosion took place on August 9, 1945.
Key facts