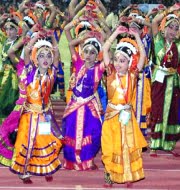 Status of Leopard in India 2018 Report

The Union Ministry of Environment, Forest and Climate Change recently released the “Status of Leop...

The “Go Electric” campaign was launched by Bureau of Energy Efficiency (BEE) in coordination wit...