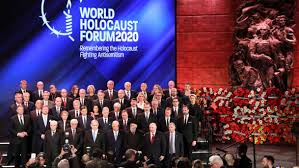 First organized in 2005 in Krakow, Poland, the 5th World Holocaust Forum took place on Thursday, 23rd January 2020 in the capital city of Israel, Jerusalem. The forum marked the 75th anniversary of the liberation of the Auschwitz death camp. This year’s event was entitled ‘Remembering the Holocaust: Fighting Antisemitism’, which had a clear message for the global society that antisemitism has no place.

The event takes places following the rise in (especially in Europe) hateful and violent expressions of antisemitism, the event is an effort to educate about the alarming situation of danger related to racism, antisemitism, and xenophobia. More than 40 global leaders attended the forum, which includes Russian President Vladimir Putin, US Vice-President Mike Pence, Presidents of France and Germany and the Prince of Wales. The forum was organized by the World Holocaust Forum Foundation, which is an international organization found to preserve the memory of the Holocaust and to promote tolerance between all religions and nationalities.