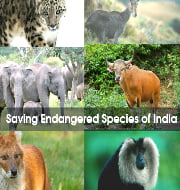 Union Government has announced that out of 96,000 animal species found in India more than 50 animals have been assessed as critically endangered (CR) and 310 as endangered (EN).
It was announced by Union Environment Minister Prakash Javadekar in a written reply to the Rajya Sabha.
Key Facts