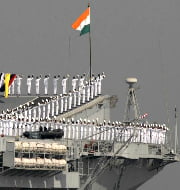 The Indian Navy Day is observed annually on 4 December to celebrate the magnificence, achievements and role of the naval force of the country.
Indian Navy is one of most potent maritime forces in the world and the most lethal in Indian Ocean. On the occasion of 45th Navy Day, President Pranab Mukherjee extended greetings to all members of the Indian Navy and their families.

Why Navy Day is celebrated?

The observance of the day commemorates the launch of Operation Trident by the Indian Navy against Pakistan on 4th December, 1971. During the 1971 India-Pakistan war, the Indian Navy had played a significant role in the bombing of the Karachi harbour, the stronghold of the Pakistani Navy. In this attack, Indian Navy sank four Pakistani vessels and ravaged the Karachi harbour fuel fields. In this operation, three missile boats of the Indian Navy, INS Nirghat, INS Nipat and INS Veer had played a pivotal role.Operation Trident had also resulted in first use of anti-ship missiles in the Arabian Sea region.