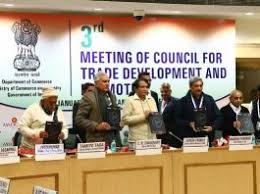 The third meeting of Council of Trade Development and Promotion (CTDP) was held in New Delhi. It was chaired by Union Minister for Commerce & Industry Suresh Prabhu and was attended by CM of Goa, Deputy Chief Minister of Gujarat, ministers from 11 states, senior state government officials and industry bodies.
The objective of the meeting was to enhance the Centre’s cooperation with the states and union territories in making the latter active partners in boosting India’s exports.

CTDP was constituted in July, 2015 to ensure a continuous dialogue with State Governments/UTs on measures for providing International trade enabling environment in States. The council was constituted to promote India’s overseas shipments. It acts as platform to develop partnership with states with aim to boost international trade. It also seeks to create a framework for making states active partners in boosting India’s exports.

The Union Commerce and Industry Minister is Chairperson of CTDP. Ministers’ in-charge of Trade and Commerce in State Governments/UTs are its members. Besides 14 secretaries of central government, including commerce, revenue, shipping, civil aviation, agriculture, food processing and economic affairs are also its members.