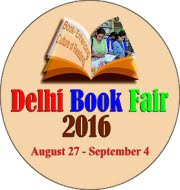 The 22nd edition of the Delhi Book Fair (DBF) began at Pragati Maidan in New Delhi.  The nine day event will conclude on 4th of September 2016.
Focus of the this edition of DBF will be to highlight initiatives undertaken by Union Government for its Sarva Shiksha Abhiyaan to inculcate better reading habits among the younger generation.
Key Facts