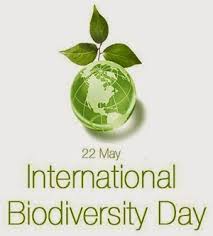 The International Bio-diversity Day is observed every year on 22 May to increase understanding and awareness of biodiversity issues. The theme this year is ‘Celebrating 25 Years of Action for Biodiversity’. It marks 25th anniversary of entry into force of Convention on Biological Diversity (at United Nations Environment Progamme Headquarters, Nairobi on 22 May 1992) and to highlight progress made in achievement of its objectives at national and global levels. The day was proclaimed by United Nations General Assembly in 2000 via resolution 55/201

On the occasion, National Mission for Clean Ganga and World Wildlife Federation (WWF)-India jointly organised workshop Ganga and its Bio-diversity: Developing a Road Map for Habitat and Species Conservation in New Delhi. The workshop was aimed at forming integrated approach for conservation of Ganga’s ecology, environment and bio-diversity by restoring Ganga’s ecological integrity.

The term Biological Diversity (or Biodiversity) was first coined by wildlife scientist and conservationist Raymond F. Dasmann in 1968. This term became widespread in use during 1980s. Biodiversity refers to totality of genes, species and ecosystems of a region. There are three levels of biodiversity viz. species diversity, ecosystem diversity and genetic diversity. The term biodiveristy is used to address several problems in conservation of environment including loss of species, destruction of habitats, invasive species, genetic pollution, over exploitation and effects of climate change on biodiversity.
Biodiversity is unequally distributed on Earth and it varies across regions on the basis of climatic and geographical factors. On earth, highest biodiversity is found in tropics. In comparison to Oceans, terrestrial biodiversity is much greater. The terrestrial biodiversity is greater at equator in comparison to poles. Around 90% of world’s biodiversity is found in tropical rainforests which occupy less than 10% of Earth’s surface. The marine biodiversity is highest along coasts in Western Pacific which is known for highest sea temperature.

CBD (commonly known as Biodiversity Convention) is legally binding document, which came asoutcome of Earth Summit in Rio de Janeiro in June 1992 and entered into force in December 1993. Its objectives are conservation of biodiversity, sustainable use of its components and fair and equitable sharing of benefits arising from genetic resources. The idea is to develop national strategies for conservation and sustainable use of biological diversity. 198 countries/territories including India are parties to CBD. United States has signed but not ratified convention.