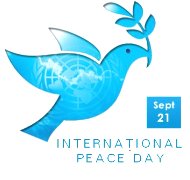 The International Day of Peace is observed across the world on 21 September every year to strengthening the ideals of peace, both within and among all nations and peoples.
Significance: The International Day of Peace acknowledges the efforts of those who have strived to end conflict and promote peace. This day is also observed as a day of ceasefire.
2016 Theme: “The Sustainable Development Goals: Building Blocks for Peace”.
To inaugurate the day, UN Secretary-General Ban Ki-moon rung the United Nations Peace Bell at UN Headquarters in New York City. The bell has inscription on its side reading “Long live absolute world peace“.
The bell has been casted from coins donated by children from all continents except Africa. It was given as gift from the United Nations Association of Japan as a reminder of the human cost of war.
Background