20th anniversary of Operation Vijay to be celebrated 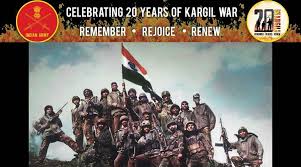 India will be celebrating this year the 20th anniversary of Operation Vijay also called Kargil Vijay Diwas for over three days from 25 July to 27 July 2019 at Dras and New Delhi.  The day is observed to commemorate victory in Kargil war with pride, honour and inspiration. The day will be celebrated with theme- Remember, Rejoice and Renew.

Objective: to evoke feeling of nationalism and patriotism especially amongst youth with scheduled nationwide campaigns and also to pay homage to valiant soldiers.

Remembrance: The Kargil conflict will forever be remembered for its strategic and tactical surprises, self-imposed national strategy of restraint (because of which war was kept limited to only Kargil-Siachen Sectors) and also swiftly executed tri-services military strategy and plans. It will also be remembered for determination, courage, daring junior leadership and raw courage of our jawans at tactical level.

Celebrations: The celebrations in National Capital of India will begin from 14th of July, with the lightning of a Victory Flame from National War Memorial, New Delhi, which will travel across 11 towns and cities, to finally culminate at Dras (a town in Kargil District of Jammu and Kashmir) wherein the flame will be merged with the eternal flame at Kargil War Memorial, which is built by Indian Army.

On Kargil Vijay Diwas, a Wreath Memorial Ceremony will also be organized at site of Kargil War Memorial in Dras to honour brave-hearts who laid down their lives during the Operation Vijay.

Events: The events are planned to highlight stories of valour by brave soldiers of this country and rekindle the pride among India’s youth. Various events being organised includes-

It was an armed conflict between India and Pakistan that took place between May and July 1999 in Kargil district of Jammu and Kashmir (J&K) and elsewhere along Line of Control (LOC).

In India the conflict is also popularly known as Operation Vijay (meaning Victory) which was the name of Indian operation to clear Kargil sector.