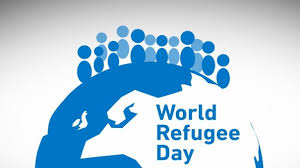 Objective: The day is overserved annually to celebrate stories and contributions of refugees.

Background: On 4 December 2000, United Nations General Assembly (UNGA) in resolution 55/76 proclaimed to celebrate 20 June as World Refugee Day, starting from 2001. In this resolution, UNGA noted that 2001 marked 50th anniversary of 1951 Convention relating to Status of Refugees. It is observed to commemorate the day to honor all refugees, raise awareness and solicit support.

As per the latest annual study released by United Nation’s office of UN High Commissioner for Refugees (UNHCS) nearly 70.8 million men, women and children were forcibly displaced at the end of 2018. This is highest number of displaced individuals in organization’s 70-year history.

The study cited that violence, wars and persecution is the reason behind driving record numbers of people from their homes worldwide.

Almost 66% of those who are uprooted from their homes are internally displaced persons who have not left their homelands. Nearly 80% of these refugees live in countries neighbouring their country of origin.

Study states that on an average, 1 person is forcibly displaced every 2 seconds as a result of conflict/persecution and refugees are among the world’s most vulnerable people.

Who is a Refugee?

As per United Nations 1951 Refugee Convention– A refugee is a person who fled his/her home and country owing to a well-founded fear of persecution either because of race, religion, nationality, membership in a particular social group, or due to political opinion.