19 new Ministers of State inducted in Union council of Ministers 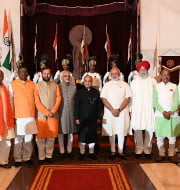 Nineteen new Ministers of State (MoS) were inducted in the Union Council of Ministers in a major expansion.
These new ministers were administered oath of office and secrecy by President Pranab Mukherjee at Rashtrapati Bhavan.
This was the second expansion of the NDA government led by PM Narendra Modi. Of the 19 new ministers, 17 are from the BJP, one each from Apna Dal and RPI.
Besides, induction of these new ministers, Minister of State (MoS) Environment, Forests and Climate Change with independent charge, Prakash Javdekar was elevated to the Cabinet rank.
The Ministers of State inducted are

Among the newly inducted Ministers, three each are from Madhya Pradesh, Uttar Pradesh and Gujarat. Rajasthan got four berths while Maharashtra got two. There is one Minister each from Assam, West Bengal, Karnataka and Uttarakhand.
Comment