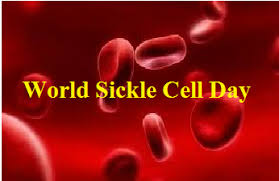 The day was 1st recognized by United Nations General Assembly (63rd session) in 2008 and Sickle Cell Disease International Organization (SCDIO), Republic of Congo and the Republic of Senegal, African Union (AU), the UNESCO (United Nations Educational, Scientific and Cultural Organization) and WHO (World Health Organisation) backed the observation of day. For the first time the World Sickle Cell day was celebrated on 19 June, 2009.

Significance: It is celebrated to improve public awareness about genetic disease and to improve treatment outcomes of sickle cell disease by early diagnosis.

Celebrations: The day is observed in a way that NGOs, doctors, governments and support groups come together to find strategies to eliminate the sickle cell disease. Government also organise several campaigns for proper treatment and cure of those suffering from disease.

What is Sickle Cell Disease?

It is one of the most commonly occurring genetic disease. It is an inherited genetic abnormality of hemoglobin (the oxygen-carrying protein found in red blood cells) due to which red blood cells (RBCs) causes stuck in small blood vessels and are unable to carry adequate amount of oxygen throughout body.

In normal condition RBCs are flexible and round (thus move easily through blood vessels) and can live up to 120 days before body needs to replace them but in sickle cell anemia, RBCs are sickle shaped, become rigid and sticky and the sickle cells last only 10 to 20 days causing anemia because of red blood cells disorder.

As per UN estimation nearly 5 lakh children are born every year with this condition and half of them die before turning 5 years of age.