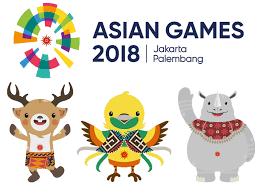 18th Asian Games concluded in Indonesia. This edition of pan-continental mega sporting was held from August 18 to September 2, 2018 in two cities – Jakarta (capital of Indonesia) and Palembang (capital of Indonesia’s province of South Sumatra). This was second time Asian Games history, Indonesia had hosted it after first time in 1962 in Jakarta. Indian women hockey captain Rani Rampal was India’s flag-bearer at closing ceremony.

18th Asian Games saw participation of around 11,000 athletes from 45 countries from across Asian continent, who competed in 40 sports, 67 disciplines, 4 new Olympic sports and 8 non-Olympic sports. It also first time hosted eSports (form of competition using video games) and canoe polo as demonstration sports. In this edition Asian Games, China has topped medals tally with 132 gold, 92 silver and 65 bronze followed by Japan and South Korea. India finished 8th with 15 gold, 24 silver and 30 bronze. The next Asian Games (19th edition) are scheduled to Hangzhou, China between 10 and 25 September 2022.
Mascots: Trio of Bhin Bhin (bird of paradise), Kaka (one horned rhino) and Atung (deer) are mascots of 2018 Asian Games. These three represent east, west and centre of country and they have dress traditional to each locality.

It was India’s best performance in the Asian Games till now. India finished at eight position both in terms of gold medals and total tally. India’s medal tally is its highest ever, as it won four more medals than in 2010 Guangzhou Asian Games. In terms of gold medal tally, India matched its best performance at the inaugral 1951 Games in New Delhi. In 2018 Asia Games, track and field events remained most productive discipline for India as it won in seven events. Indian athletes had claimed two gold medals in shooting and wrestling and one each in boxing, bridge, rowing and tennis.

Asian Games
It is pan-continental multi-sporting event held every four years between athletes from all over Asia. It is also known as Asiad. It is second largest multi-sport event after Olympic Games. It is organised by Olympic Council of Asia (OCA) since 1982, prior to that, it was regulated by Asian Games Federation (AGF). The first Asian Games were held in New Delhi, India in 1951. Since then overall, nine nations have hosted it and forty-six nations have participated in it, including Israel (now excluded from it after its last participation in 1974). The 17th edition of games was hosted by Incheon, South Korea from in 2014. India had hosted Asian Games two times in 1951 (inaugural) and 1982, both in New Delhi.