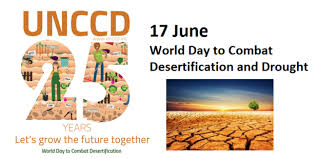 The World Day to Combat Desertification and Drought (WDCDD) is being observed globally on 17 June 2019. According to United Nation (UN), Desertification means degradation of land in arid, semi-arid and dry sub-humid areas and that Desertification does not refer to expansion of existing deserts.

Background: WDCDD was proclaimed on 30 January 1995 by United Nations General Assembly’s (UNGA) resolution A/RES/49/115, after the day when United Nations Convention to Combat Desertification (UNCCD) was drafted. In 2019, UNCCD also celebrates 25 years of progress made by countries on sustainable land management.

Theme for year 2019 is- Let’s Grow the Future Together, which reflects on 25 years of progress and envisioning next 25 years.

Concern: As per United Nation (UN), world is losing 24 billion tons of fertile soil ever year and  National Domestic Product (NDP) in developing countries is reduced by up to 8 % annually due to dryland degradation.

Siginificance: WDCDD is a unique occasion that serves as a reminder global community that desertification can be effectively tackled and that solutions are possible with tools such as strengthening community participation and cooperation at all levels.

In last 5 years forest cover in India has increased and the government is committed towards improving it further as well for working towards betterment of farmer and environment protection.

India seeks to set an example in combating desertification and also shows readiness to cooperate with world in this direction.