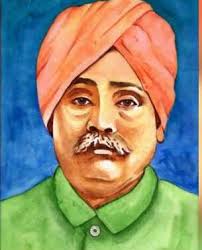 The 155th birth anniversary of the great Indian freedom fighter LalaLajpatRai, popularly known as Punjab Kesari, who fought for India’s freedom from British rule, was observed on 28th January across the country. He earned the titles of `Punjab Kesari’ and `Lion of Punjab’ for his ideology of nationalism and freedom.

LalaLajpatRai was part of the nationalist trio of Lal-Bal-Pal which comprised of him itself, Bal Gangadhar Tilak and Bipin Chandra Pal and the trio advocated Swadeshi movement to use Indian made goods across the nation and to boycott imported goods with a vision to make India a self- reliant country.

He helped in establishing the Dayanand Anglo- Vedic school system which is popularly known as DAV schools and the Rai University of Veterinary and Animal Sciences in Hisar, Haryana was named after him. During the protest against Simon Commission which was led by Lala Lajpat Rai which was set up by the British rulers, he was brutally injured and died shortly from a heart attack in 1928.