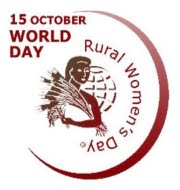 The International Day of Rural Women is observed annually across the world on 15 October to recognize the critical role and contribution of rural women.
Significance of the day: Highlights the critical role and contribution of rural women, including indigenous women in enhancing rural and agricultural development, eradicating rural poverty and improving food security.
2016 Theme: “Climate is changing. Food and agriculture must too”. It tries to bring focus on farmers, pastoralists and fishers who are standing on the frontlines of food insecurity due to climate changed due to temperatures rise.
The United Nations also calls for empowering rural women as a pre-requisite for fulfilling the vision of the Sustainable Development Goals (SGD) which aims at ending poverty and hunger, achieve food security and empower all women and girls.
Why International Day of Rural Women is celebrated?

Background: The first International Day of Rural Women was observed on 15 October 2008. The day was constituted by the UN General Assembly by passing resolution 62/136 in December 2007.