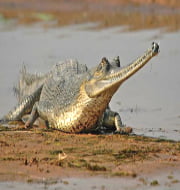 Punjab government has announced to release 15 Gharials in the Beas belt, near Harike Patan in order boost tourism.
The Gharials species will be released as part of state government’s plan to make Beas belt, a natural habitat of the fish-eating crocodile species.
The release of Gharials has been planned in February-March 2015 near Karmowal village (near Harike Patan water bodies) by the Experts from World Wide Fund for Nature (WWFN).
Karmowal village has ample water bodies with sand banks making it suitable site for developing as habitat for the species. Gharials will be released depending upon the success of the initial phase of making natural habitat and after the release they will be kept under close watch.